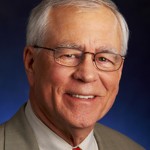 received a PhD in physics from the University of Texas. He joined the University of Colorado, ultimately serving as Professor and Chair of Radiology for several years. In 1985 he moved to Chicago as Vice President of Science and Technology for the American Medical Association. In 1991 Dr. Hendee joined the faculty of the Medical College of Wisconsin (MCW) as Senior Associate Dean and Vice President with faculty appointments as professor and vice chair of radiology with additional professorships in biophysics, radiation oncology, and bioethics. He is also Professor of Biomedical Engineering at Marquette University; Adjunct Professor of Electrical Engineering at the University of Wisconsin-Milwaukee; and Adjunct Professor of Radiology at the University of New Mexico, University of Colorado, and Mayo Clinic – Rochester . From September through December 1994, Dr. Hendee served as Acting Executive Vice President and Dean of the Medical College. In January 1995 he assumed additional responsibilities as Dean of the Graduate School of Biomedical Sciences. In 2005 he was appointed President of the MCW Research Foundation. He currently holds the title of Distinguished Professor of Radiology, Radiation Oncology, Biophysics and Bioethics at MCW.