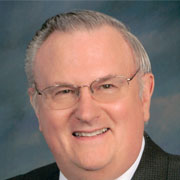 is Professor of Epidemiology at Vanderbilt University School of Medicine. He is Past President of NCRP (2012 to 2018) and currently the Director of Science. After being awarded Doctor of Science in Epidemiology from Harvard University Dr. Boice went on to join the world-renowned National Cancer Institute (NCI) where he developed, and then in 1984 became the first chief of, the Radiation Epidemiology Branch. He remained in the U.S. Public Health Service (USPHS) for 27 y retiring as Captain. From 1997 to 2017, he was a member of the Main Commission of the International Commission on Radiological Protection, and for 25 y from 1993, a member of the U.S. delegation to the United Nations Scientific Committee on the Effects of Atomic Radiation. Dr. Boice has made substantial and significant contributions to our understanding of the risks posed by exposure to radiation, with over 550 publications in the scientific literature, many of them providing key elements for the scientific basis of radiological protection. He has been invited to deliver many distinguished lectures, including the Lauriston Taylor Lecture of the NCRP and the Sievert Lecture of the International Radiation Protection Association. His awards include the Harvard School of Public Health Alumni Award of Merit, the EO Lawrence Award from the U.S. Department of Energy, the Gorgas Medal from the Association of Military Surgeons of the United States, the outstanding alumnus award from the University of Texas at El Paso, the Distinguished Service Medal from the USPHS, the NCI Director’s Award in 2021, and recently he was elected Honorary Fellow of the U.K. Society for Radiological Protection in 2022. The “John D Boice Jr Young Investigator Award” was established by NCRP in 2019 to recognize early career professionals. He currently serves on the Steering Committees for the Image Gently Alliance and for the Childhood Cancer Survivor Study (St. Jude). Dr. Boice has worked tirelessly to direct and advance the U.S. Million Person Study of nuclear workers and atomic test veterans, which will add significantly to our knowledge of the effects of prolonged exposure to low levels of radiation.