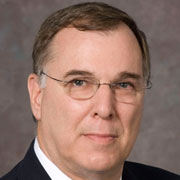 is a Clinical Professor of Radiology and Clinical Professor of Radiation Oncology at the University of California (UC) Davis School of Medicine. He holds the title of Director Emeritus Medical/Health Physics Programs and retired as Associate Chair of the Department of Radiology in 2018. He is currently Chair of the Board of Directors and Senior Vice President of NCRP. He is an expert on the biological effects, safety and interactions of ionizing and nonionizing radiation and holds multiple radiation detection technology patents. With over 40 y of experience, he has served as a subject matter expert and an advisor to government agencies and institutions throughout the nation and around the world, including the U.S. Department of Homeland Security, the U.S. Food and Drug Administration’s Center for Devices and Radiological Health, the World Health Organization, and the International Atomic Energy Agency in the areas of ionizing and nonionizing radiation protection, risk communication, medical physics, and radiological emergency medical management.

In 2016, Dr. Bushberg was appointed Vice Chair of the Committee on Man and Radiation, which is a Technical Committee of the Institute of Electrical and Electronics Engineers Engineering (IEEE) in Medicine and Biology Society. In addition, he is an elected member of the IEEE International Committee on Electromagnetic Safety and was recently appointed by the U.S. Health Physics Society as its representative to the International Radiation Protection Organization Committee on Non-ionizing Radiation Safety.

Former Commander in the U.S. Naval Reserve, among other assignments, CDR Bushberg served as Executive Officer of the Chemical/Biological/Nuclear Technical Unit 120 Pacific, a highly skilled multidisciplinary military emergency response and advisory team based out of the Alameda Naval Air Station in California.

Dr. Bushberg is an elected fellow of the American Association of Physicists in Medicine and the Health Physics Society. He is certified by several national professional boards with specific subspecialty certification in radiation protection and medical physics and served as a Director and Vice Chair of the American Board of Medical Physics from 2018 to 2022.

Prior to coming to the UC Davis Health System as technical director of Nuclear Medicine, Dr. Bushberg was on the faculty of Yale University School of Medicine Department of Radiology, where his research focused on radiopharmaceutical development. Dr. Bushberg has had responsibility for postgraduate medical education in medical physics, radiation (ionizing and nonionizing) biology, and protection for more than 30 y. The fourth edition of the textbook, The Essential Physics of Medical Imaging, authored by Bushberg, Seibert, Leidholdt, and Boone, is used extensively in radiology residency programs throughout the United States.